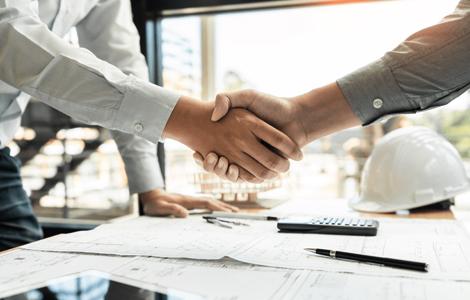 The King & Benton group of companies, founded in 1996 by Steve Charest, is a leading Southwestern Ontario privately owned real estate Development / Redevelopment Company based in Brantford, Ontario. It has acquired over 1000 acres of industrial/commercial land and over 800,000 square feet of industrial and commercial space for its portfolio.

King & Benton is dedicated to strategic, sustainable, low-impact development and responsible growth, priding itself in ecological stewardship and a community-oriented approach to all its projects.

In early 2015, King & Benton, along with their partner, Guswhenta Holdings, made history when they purchased 50 acres of land in the Haudenosaunee traditional territory and along the Haldimand Tract, which they then repatriated back to the community trustees of the Six Nations of the Grand River.

King & Benton is no ordinary developer; it’s a “Partner in Building Communities.”

The King & Benton Development division is quickly earning a reputation as one of Ontario’s leading real estate developers. Its success isn’t just about the sheer size of its projects but its ability to bring together a wide range of partners to deliver unique solutions for world class development projects.

The King & Benton Development division currently owns more than 700 acres of land designated for industrial and commercial development, the majority of which is located in the prime area of Southwestern Ontario, near the 400-series highways.

Development with the Environment in Mind

The King & Benton Development division just as the Redevelopment Division attempts to drive development with a minimal impact on the environment. It’s premier development of the Oak Park Business park is a prime example of King & Benton Development division dedication to help curb urban sprawl. The Oak Park Business Park is slated to be built on a depleted gravel pit. The massive, over 400 acre reuse of land took a great deal of planning, and thinking outside-the-box to overcome the challenges of rehabilitating this land to make it suitable for development. King & Benton team took those challenges head on and is now in the process of delivering one of the largest master planned private developments in Ontario and one of the largest redevelopments with over 4.5 million m3 of earthworks. This reuse of land results in over 400 acres of new industrial and commercial space without expanding into any green space.

King & Benton Redevelopment division has a proven track record of revitalizing abandoned and derelict sites and breathing new life into brownfields. King & Benton Redevelopment takes a passionate approach and thinking outside the box to every single one of its redevelopment projects. This approach has been ingrained in the company’s corporate culture and has helped to develop a company that sees what others see as an obstacle as simply another challenge and an opportunity for self improvement and growth.

The environment challenges of brownfield remediation that usually deter other developers allowed King & Benton Redevelopment to acquire an immense amount of expertise in remediation skills and in turn helped grow the company into a leading private redeveloper of brownfield sites.

King & Benton Redevelopment’s approach to redevelopment involves a lot more then just brownfield redevelopment. It not only involves redeveloping a single property but in turn transforming whole communities, economic regions, and improving the livelihood of all that live and work in the local community.

King & Benton Redevelopment works alongside provincial and municipal governments, planning and zoning officials, and community groups to ensure a positive outcome for all those impacted by a redevelopment project.